« on: September 14, 2017, 04:03:23 AM »
The goblin locked in battle with Pieron cackles as it dodges under his swings, a measure of overconfidence showing through in its movements. Its own slashes, however, go wide or scrape off the warrior's leggings. A black-feathered arrow thunks into the ox-cart, reminder that a sniper is also still at large - but that goblin is now gone from sight, disappeared into the bushes.

(click to show/hide)
Look on the bright side: nobody's hitting this round. Pieron's buddy swings and misses, the sniper misses as well, but succeeds in hiding as a bonus action.

Though these aren't usually the most efficient actions to take, I will bring them up here anyway: In combat, you can take the Help action to grant another ally advantage on an attack roll against an enemy adjacent to you. It is also possible to try an active Wisdom (Perception) check to find a hidden enemy, also as an action. Again, not particularly efficient, but always there as fallbacks.

As I'm posting from my phone on a train, please refer to last round's map and initiative roster; not much has changed.
43

Comments on spells that stuck out:
Lion's Charge may cause timing issues, since you're only supposed to get one bonus action in a turn and it already takes your bonus action. I might do something like having it be a normal action spell that includes making an attack, like two of the cantrips in Sword Coast Adventurer's Guide, which knocks prone on a hit and lets you attack again as a bonus action if the target is knocked down. The movement could be a requirement for casting or included in the action as well. I might make it a third level spell at that point since it's letting you attack twice, which normally starts happening around level 5, but being a limited resource and requiring some hoops to jump through might make it fine at level 2.

Entice Gift seems fine, but might work more cleanly if you made the target give you their gift as a reaction right away, or made them use their next action to do it like an upgraded Command.

I have mixed feelings on Lorecall. I like that you're putting the various spells together into one that makes a lot of sense. I'm not sure about outright granting proficiencies as a fairly accessible spell, but since the duration is short and it uses a spell slot it might be fine.

Off Topic Fun / Re: what are you reading?

« on: September 08, 2017, 11:21:10 AM »
Finished the Revanche Cycle by Craig Schaeffer just yesterday. Now on a magazine of nonfiction articles about ancient Greece and Hard-Boiled Wonderland and the End of the World by Haruki Murakami.
47

« on: September 05, 2017, 07:23:39 AM »
Sensing weakness, the goblin assaulting the wagon appears emboldened and continues pressing in on Kovoir, only to be once again thwarted by the dwarf's armor. Perhaps this is the chance for a turnabout?

(click to show/hide)
The goblin attacks Kovoir, and misses again, meaning, Zuzie and Pieron are up. 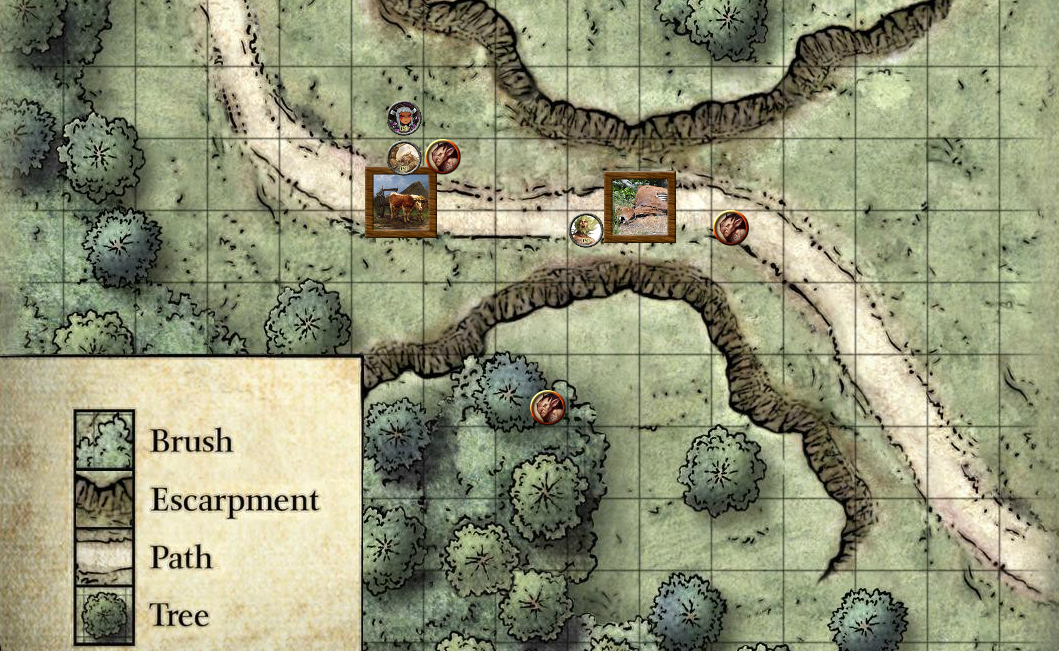 « on: September 04, 2017, 06:58:05 AM »
I mentioned this in an aside in one of the IC posts, but since it's also relevant for Pieron's last turn, a ranged attack made from within 5 feet of another combatant has disadvantage. In the case of Pieron's javelin throw last round, this doesn't matter since it missed anyway, but it may be relevant to Kovoir and Zuzie if they want to deal with the archer.
52

« on: September 04, 2017, 06:54:08 AM »
The goblin up on the escarpment ducks under the thrown javelin, and when Pieron readies his maul, the other is suddenly within his reach, and its knife finds the warrior's flank. Blood flows, but Pieron is not yet down, and he manages to dodge a black-feathered arrow from the sniper, who proceeds to scurry into the brushes and hide.

(click to show/hide)
The second goblin reaver attacks Pieron and achieves the dreaded level one critical hit! In D&D 5e, a natural 20 (and only a natural 20, no weapons have extended crit range or anything like that) automatically hits and allows the attacker to roll their damage dice twice. Only damage dice are doubled, not static modifiers, but all damage dice are doubled, including things like sneak attack damage. In the goblins' case, since their base damage is 1d6+2 and I'm taking averages, the goblin deals 2d6+2 damage, average 9.
The reaver then disengages from Pieron as a bonus action, like its buddy did, and retreats behind the horse carcasses. Pieron can catch up with it no problem, but will need to separate further from the others.

The goblin archer shoots an arrow at Pieron, but misses. It then hides as a bonus action, but with its result of 13, both Pieron and Suzie can tell where it is.

« on: September 03, 2017, 07:38:56 AM »
If at no point you leave their reach, yes, not that you are ever assumed to be "walking" in combat. If you decide to do that kind of thing, you'd be circling around your opponent carefully, whereas leaving their reach to go somewhere else entails some level of turning your back on them, unless you specifically disengage.
55

A thin, paper-bound poetry anthology long ago found in the possession of a deceased wizard and added to the University's special archive. Its author is unknown, but its last owner was said to have repeatedly seen a dark forest and a single red star in an otherwise empty sky in their dreams. Although it seems made just for them, it must have been written long before Miriana's or Camelia's birth.

Its labyrinthine cross-references and hidden meanings seem to allude to specific times, places, and entities:
Mountains far to the northeast, genesis of the ancient elves of prehistory
The blood-sorcery of antiquity, now diluted throughout the continent
A heretic monastery to the west, once home to immortals with brass hearts
56

An ancient giant that was tamed by a saint and set to guard treasures or places of vital importance. Its one-eyed skull mask endows it with servility and supernal vision that pierces through deception, while its base nature gives it vigor, patience, and overwhelming strength. The ornamental wings of the bone mask invoke White Wise Gienah, tamer of the platinum dragon, who is often depicted as a giant raven with pure white feathers.

Where the dwarves oppose the darkness beneath their mountain homes without exception and decry its investigation or appropriation as dangerous folly, the human church supports bending to the light's ends what can be bent. To do so is to bring order to chaos and inherently furthers the gods' mission. To serve such powers or deal with them equally, however, is a very different matter.
57

« on: September 02, 2017, 07:04:21 AM »
The bolt of fire goes wide, scorching a mark into the escarpment next to the melee, but it certainly gets the ambushers' attention. The goblins cry "Booyahg! Booyahg!" to each other and make hasty motions in the dwarf's direction, and one of them takes advantage of Pieron's leg wound to slip past him and charge Kovoir. Its long knife meets the dwarf's mailed arm.

(click to show/hide)
Initiative order:
Code: [Select]
[s]Kovoir 16 - AC 15, HP 9[/s]
Goblin Reaver 14 - AC 15, HP 7
Zuzie 13 - AC 13, HP 10
Pieron 7 - AC 15, HP 10
Goblin Reaver 4 - AC 15, HP 7
Goblin Archer 3 - AC 13, HP 7
The first goblin reaver moves away from Pieron to attack the wizard, who now has cover from their archer (the ox-cart proviced +2 AC against ranged attacks if you have it between you and the attacker). Moving out of melee range of another combatant provokes an attack of opportunity in 5e much like it does in 3.x, though the rules are slightly different (see the spoiler block below the combat map for details). You can avoid attacks of opportunity by taking the Disengage action, which causes you to provoke no opportunity attacks with any of your movement for the rest of your turn. This requires no roll or anything, but does take your combat action.
However, goblins, being cowardly and nimble combatants, can hide or disengage from enemies as a bonus action, in addition to their combat action (rogues get a similar ability at level 2). Thus, the goblin disengages from Pieron without an opportunity attack and attacks Kovoir, but misses.

Zuzie and Pieron go next. 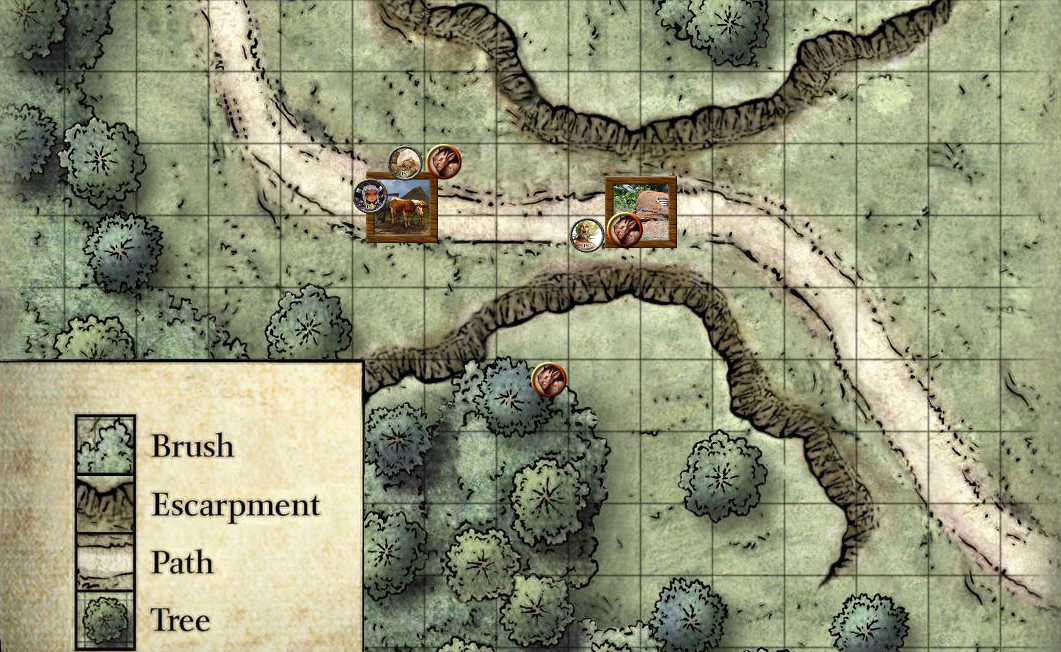 (click to show/hide)
The main difference that matters for the current fight is that this is basically the only action that provokes opportunity attacks - ranged attacks, whether with a weapon, a spell, or any other means, made while you're in close combat do not provoke attacks of opportunity, but they do suffer from disadvantage (that is, roll twice and take the worse).

For the extra curious, the other big difference is that opportunity attacks are made as a reaction, of which you get one each turn much like a bonus action. Think of it as like 3.x's immediate action. This means opportunity attacks are mutually exclusive with spells or class features that can be used as a reaction, and is presumably why there's only really one trigger for them without specific character options.
59

A pair of stones engraved with matching friendly faces, large enough to fit comfortably in one hand. When separated, their holders may learn about each other's whereabouts and well-being and briefly converse with one another through them. These stones are especially prized by the paladin orders, for who uncertainty and isolation are foes as real as monsters and heretics.

An attuned holder can take an action to learn the approximate whereabouts and condition of the other stone's holder. Accuracy depends on distance and the holder's own familiarity with the other's surroundings. Once between sunrises, the holders can hold a short exchange by speaking through the stones.
Pages: 1 2 [3] 4 5 6 7 8 ... 125